For anyone who doesn’t already know, I’m no longer running the CMCI blog but since September I’ve been running social media for the Women’s Film and Television History Network. They asked us to write about our experiences so far. If you’re interested you can see the blog here and find out more about the Network. thanks, Natalie 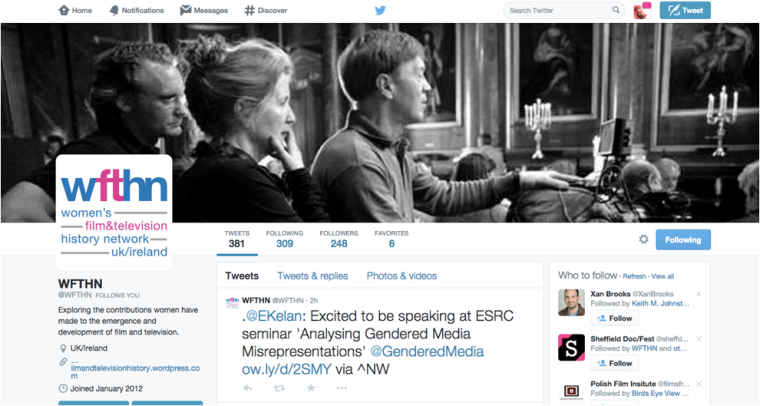 We are the new(ish) faces behind WFTHN’s social media. We took over the running of WFTHN’s Facebook and Twitter accounts in September 2014. We are both PhD students and Graduate Teaching Assistants. Natalie has worked in the UK film industry for many years, including as a Senior Development Executive at the UK Film Council and for Granada Film. 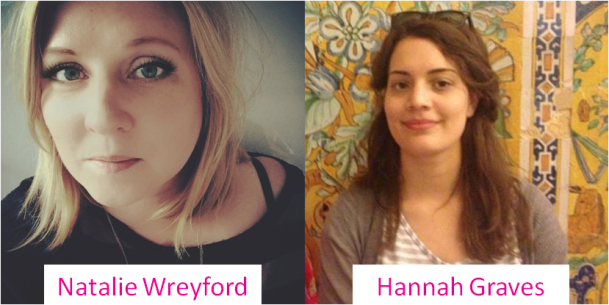 Natalie is at King’s College London and her research is attempting to unpack why there are so few female screenwriters in the UK film industry, and why it’s not changing despite increased interest in gender inequality. Hannah is at the University of Warwick. Her archival-based research explores the work of “message movie” producers and the gendered construction of liberalism in mid-century Hollywood.

Since we took over our Facebook followers have increased from 317 to 417 at time of writing, and Twitter followers are up from 126 to 265.  If you’ve recently joined…

Read Tamsyn Dent’s report on the panel she did with CMCI’s Bridget Conor and Natalie Wreyford at the Doing Women’s Film and Television History Conference 2014. The panel was entitled “Forget the female, take that away from my job title, I’m a writer and I expect to be treated the same’: Challenging myths of participation in creative work. Reflecting too perhaps, Nicki Menaj’s comments yesterday that she no longer wants to be considered just a “female rapper”.

Conferences are a great way to get away from the computer screen, share ideas, thoughts on research and catch up with other academics from related fields so I felt very honoured to have a paper accepted as part of a panel presentation on the 2nd ‘Doing Women’s Film and Television History’ conference organised by a committee of academics from the Women’s Film and Television History Network (click on link to take you straight to their site).

The purpose of this conference is to provide a space for academics, activists and industry professionals to consider the specific contribution of women to film and television. Given that women have been significantly contributing to film and television for over a hundred years, it is perhaps a little depressing that this is only the second year that the conference has been running but here’s hoping that its scope and status continues to develop into…

Hannah Hamad reports on the ‘Sex and the City Ten Years On’ conference at the University of Roehampton:

“Springtime in London [it’s not New York but… ]. It’s the tenth anniversary of the broadcast of the final season of Sex and the City (1998-2004), I’m gathered with a group of scholars for a conference exploring its cultural afterlife, and I can’t help but wonder… Have scholars said everything there is to say about Sex and the City? [not at all] What is its legacy for television and the cultural landscape?[complex and multi-faceted] And will every paper be full of rhetorical questions and delivered in the style of one of Carrie Bradshaw’s ponderous columns? [mercifully not]…”

Hannah Hamad is Lecturer in Film Studies at King’s College London. She is the author ofPostfeminism and Paternity in Contemporary US Film: Framing Fatherhood (New York and London: Routledge, 2014), as well as various articles on postfeminist media culture, UK reality TV, Hollywood cinema and contemporary stardom and celebrity.

It’s in their nature by Natalie Wreyford

Inspired by Emma Dabiri’s article in The New Statesman about hair in which she asked us to “Imagine a world that is dominated by Black Africans”, where “All the successful women in society have full resplendent, Afro hair, even the minority white ones.” I thought it might be interesting to try a similar imaginative experiment about gender. So here goes. There’s a lot I couldn’t fit in. Please feel free to come up with some additions.

Imagine a boy… born into a world where all the daddies stay at home and look after the children and the mummies go out to work full time. Where, in the first years of his life, he sees a lot more of Daddy and other daddies than he does of Mummy, and he starts to link his own gender with this important role in life.  He is given toys that promote this association – baby dolls to look after, play food and supermarket baskets, even miniature cleaning equipment. He sees Daddy do the cleaning, the shopping, the cooking, the tidying up, and it reinforces the idea that this is what boys and men do.  Mummy helps a bit, but it’s not really her job. He sees it all the time on TV and in films too. The men always stay at home with their children and they don’t often have other jobs, only sometimes they are nurses and teachers and other nurturing roles. He also enjoys his sister’s programmes, all about adventures and rescuing people and fighting the bad gals, but his friends all have the same T-shirts he does, the ones with the pretty boys who wear the sweetest shorts and shirts, and who gaze out bashfully from his colouring books and dinner plates, as they pick flowers and stroke baby animals. As he starts school and starts to learn about the world, he begins to realise that the stuff Mummy does, out there in the big world, might be a bit more interesting that this small cozy world of Daddies. He’s doing well at school. He’s ready for new adventures. He’s encouraged to pursue what he’s interested in, and imagine himself in some of the roles that mummies (and a few daddies) take. But all the time, in the back of his head, and often in the front too, is the reminder that one day he will most likely want to have children too, and how will that fit in with all the other plans he has? How will he look after them? He had better make sure that he finds himself a good woman to look after him and the kids. He’d better make sure he doesn’t do anything to put the ladies off. He’d better make sure he looks good all the time, because you never know when Mrs. Right is going to appear. Also the girls seem to have much more confidence in class. They’re not afraid to speak out, or to mess around and get in trouble. It’s part of their nature. It might help if the girls weren’t always commenting on the way he and the other boys look. And reading those magazines stolen from their mums with pictures of men with no clothes on lying around in the strangest of places. The girls have started asking him to text them a picture of himself like that. He doesn’t want to, but he really wants the girls to like him and some of the other boys have done it. As he reaches senior school he starts to think that he should have as much right as the girls in his class to do whatever he wants. But he feels most comfortable in the supportive environment of male-dominated subjects where they talk about art and relationships and don’t get laughed at by the girls when they put on those unflattering lab coats and goggles.  His dad went back to work a few years ago, but he’s always there to pick him up from school and on Fridays he goes to the Supermarket. That’s also the day the cleaner, Jose, comes. By the time he’s at university, the boy has decided that he wants to try to make his mark in this world. He’s ambitious to have a good job and to make a contribution to the world. He’s found a girlfriend who is pretty nice to him (after a series of disastrous learning experiences with girls who were only interested in losing their virginity with him and made him feel pretty insecure and unattractive at times). He believes it is possible to have a career and a family. It’s all a question of balance. He imagines working flexi-time, rushing back from an exciting day at work to pick up the children from nursery and sing them to sleep. He doesn’t dare talk to his girlfriend about these things. If she got any idea that he was thinking even in vague, speculative terms about these sort of things it would probably make her run a mile. It’s not like he wants to rush into things, but sometimes he wonders whether it will be as easy as he thinks (he’s heard thinks from the Masculists at the students union which scared him a bit. Something about men doing ‘second shifts’ of work and childcare and not being paid as much as women, and not making it into the senior jobs in practically any professions). But maybe those men don’t want to rise to the top of their professions. That’s fine. Maybe they prefer to stay at home and look after the kids, just like their dads did. After all, it’s in their nature isn’t it?

New York Magazine  collected a variety of images that come up when you search terms such as “feminist,” “girl power,” or “career woman” on stock photography sites. The results are pretty depressing. See article below:

“One of the Movember mantras is: “Real men, growing real moustaches, talking about real issues”. The slogan is as misguided as its campaign: Movember is divisive, gender normative, racist and ineffective against some very real health issues.”

Some of you may have heard about the recent LSE Law event ‘Is rape different?’, at which invited speakers Helen Reece and Barbara Hewson argued that rape victims are in some sense responsible for being raped. Providing a platform for these kinds of views at institutions such as the LSE lends legitimacy to victim-blaming attitudes which are already prevalent in contemporary UK culture. The editors at Feminists @ Law have put together a response to the event, which commentators can support via the comments function:

“Most horror movies are generally told from a male perspective, despite the fact that studies have shown the audiences for these films are 50% female. There have been some powerful genre movies made by women, featuring feminist leanings and a strong female viewpoint. We wanted to highlight these works — those films that bypass the stereotypical (naked) damsel in distress trope and call attention to the male gaze, sometimes turning it back onto itself. If the only names that come to mind when discussing horror are Hitchcock and Romero, let this list also serve as an introduction to fantastic female filmmakers who enjoy scaring the hell out of their audiences.”

“There seems to be a lot of confusion about the Bechdel test. Many people think the goal is to pass the test, but actually, that’s not it at all.”

Interesting argument by Jennifer Kesler: The Bechdel Test: It’s Not All About Passing